Home | Blog | blog | What is Myrtle Rust and is it a Threat to WA’s Fauna and Flora?

Whether your tree has become infected or has simply grown too large for your garden, there are many situations that may require you to enlist the services of a professional tree surgeon in Perth. Here at Perth Arbor Services, our experienced team have the expertise and modern equipment you need to ensure your arboricultural projects are carried out safely and to a high standard of quality.

As you may have heard, one of the most pressing issues at the moment is myrtle rust, a disease that poses a serious risk to the health of trees across Australia. If left to go unchecked, myrtle rust can quickly spread and have devastating effects on the landscape as well as the animals that inhabit it. Although the government is taking steps to keep the disease contained, it’s important that homeowners are also proactive in the fight against myrtle rust. Being able to identify the symptoms and knowing what to do in the event of an infection can help reduce the spread of myrtle rust and keep local flora and fauna happy and healthy. We’ve rounded up everything you need to know about myrtle rust. 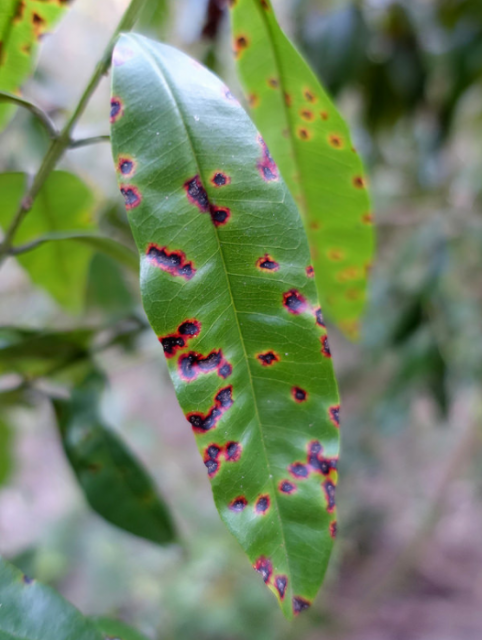 What is Myrtle Rust?

The first step in stopping myrtle rust taking over the trees in your backyard is to understand what the disease actually is. In a nutshell, myrtle rust is a serious disease that is known to infect, damage and kill trees in the Myrtaceae family of plants, including a number of Australian native trees and shrubs. Some of the plants that are at risk include:

…and many more. In fact, it’s believed that more than 350 species are susceptible to myrtle rust. The disease is caused by Puccinia psidii, a foreign fungus that was introduced to Australia and first discovered in 2010.

At this stage, it’s still not clear exactly how myrtle rust first made its way to Australia, but research shows that the fungus is incredibly effective at spreading across far distances. Humans are often inadvertent carriers, as the spores of myrtle rust can travel in clothing, skin, hair and manmade objects. In addition, the spores can also propagate via natural means such as animals, insects, wind and contaminated plant material. Its strong dispersion abilities make it very challenging to control and remove from trees in a natural setting.

As it stands, there is only strain of the fungus present in Australia, but overseas there are known to be at least several strains.

Where is myrtle rust found?

Myrtle rust is widely distributed and established along the east coast of the country, but has yet to make it to Western Australia thanks to the harsh conditions of the desert that separates the east coast from the west coast. Nevertheless, it’s critical that people in Western Australia remain vigilant and proactive to minimise the risk of myrtle rust spores making their way to the west coast.

The fungus was initially identified on the coast of New South Wales in 2010, after which it quickly spread to the surrounding regions. Today, it can be found along the entire eastern coastline, from the top of Queensland right the way down to the bottom of New South Wales.

Although it’s mostly the east coast that has been affected, the disease has also made its way further south to Victoria, where nurseries and other commercial properties concentrated around the Melbourne area have been infected. In 2015 it was discovered that myrtle rust had even managed to make its way to Tasmania, where plants in both commercial properties and private gardens had been affected by the disease. Thankfully, it has yet to infect the natural ecosystems of Tasmania. Farther north, myrtle rust has also been spotted in plants located on Melville Island in the Northern Territory, as well as in Darwin.

It’s no exaggeration to say that myrtle rust could feasibly change the face of Australia’s natural landscape. Due to the fact that Myrtaceae trees are so widespread in Australia, the disease has the potential to disrupt many of our natural ecosystems. The effects have already been felt in various biomes across New South Wales and Queensland, including coastal regions, river wetlands, sand islands and more. While it’s still not clearly understood how myrtle rust will impact Western Australia (climate differences between regions make direct comparisons difficult), it has the potential to have a profound and lasting effect on our forests. For example, many types of iconic local eucalyptus trees could be at risk, including jarrah, tuart, karri and more.

It’s important to remember that it’s not only trees and plants that are at risk. Dozens of types of animals rely on Myrtaceae flora for food and habitat, and if anything were to happen to the delicate ecosystem the effects on the wildlife could be catastrophic.

The impact on Australia’s flora and fauna is the biggest threat, but it’s worth noting that myrtle rust could also have a huge effect on the economy. Plantation forestry, plant nurseries and new growing sectors are significant contributors to the country’s GDP, and all stand to suffer from myrtle rust.

The nursery industry, for example, generates around $800 million annually and also plays a key role in our fresh produce market. Myrtle rust has already had a notable effect on the sector, as regulatory bodies have introduced tighter restrictions on plant trade in the hopes of controlling the spread of the disease. It has also resulted in the removal of a number of plant species that are known to be particularly vulnerable to myrtle rust.

The industry that has been hardest hit is the nascent lemon myrtle sector. Prized for their high citral content, lemon myrtle leaves are widely used in the production of teas, spices, food flavouring, cosmetics and aromatherapy products. However, these plants are also highly susceptible to myrtle rust, and many are plagued by leaf loss, dieback and reduced growth. It’s estimated that plantations growing untreated lemon myrtle have experienced a 70 percent drop in crop yields – a devastating figure for any young industry

What Does it Mean for Regular Homeowners?

While myrtle rust has the potential to wreak havoc on Australia’s natural landscapes, on a smaller scale it can also be detrimental to the health of your gardens and local parks. A variety of commercial plants commonly found in urban and suburban gardens are known to be at risk of myrtle rust. For example, in New South Wales, a Western Australia peppermint tree commonly known as ‘Afterdark’ – a common feature tree grown in many properties across the country – was found to be infected with the disease. A number of other popular shrubs such as some lilly-pillies, kunzea and geraldton wax are also considered to be susceptible.

Your neighbourhood could very well feel the effects, particularly if the council has opted to focus on lining your streets or parks with a particular type of tree that is vulnerable to the disease. The visual impact is obvious, as plants suffer from stunted growth, discoloured leaves and deformities. Looking past the aesthetic factor, it is again the animals that stand to suffer the most. A wide section of Australian wildlife depends on Myrtaceae plants found in suburban parks and backyard gardens as a source of food and a safe habitat. As such, losing these trees could sadly affect local wildlife populations.

What is the Government Doing to Combat Myrtle Rust?

After myrtle rust was identified in 2010, the government worked closely alongside industry groups and those with properties affected by the fungus to try and contain the outbreak of the disease.

These efforts involved direct eradication attempts such as removing infected plants and using fungicide to stop the disease from spreading. The government also tried to isolate the fungus by trapping spores, quarantining infected properties and performing comprehensive testing to better understand the movement of the disease. Unfortunately, the attempt to eliminate the fungus ultimately proved to be unsuccessful, and the disease quickly moved from commercial plantations to natural settings where, as noted, it’s all but impossible to control the fungus.

Based on expert third-party advice, the Australian government was forced to face the reality that it was not going to be possible to eradicate myrtle rust from the country. As a result, the focus of the effort moved from eliminating the disease to managing it and reducing its impact on the flora and fauna of Australia. 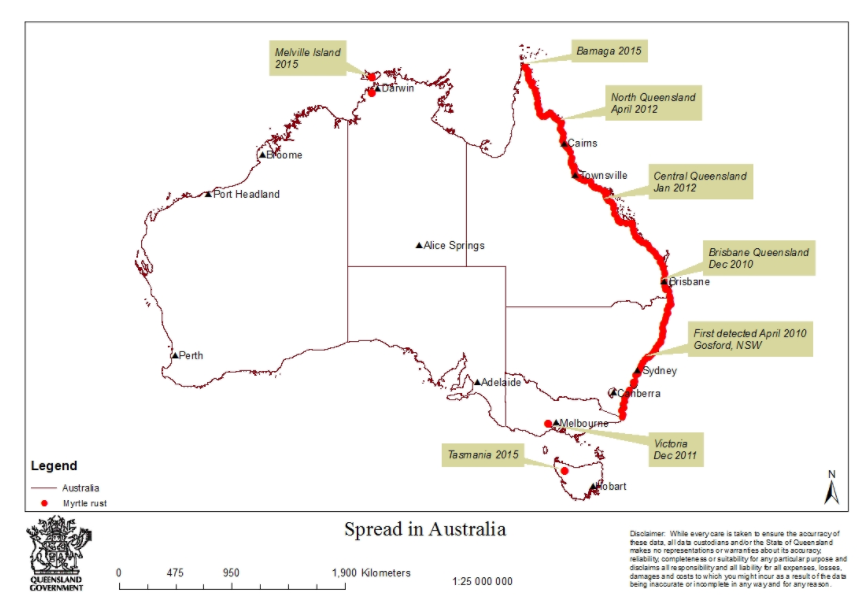 How to Identify Myrtle Rust

This might all sound very doom and gloom, but the silver lining in all of this is that it is at least possible to protect the plants in your garden. A number of sprays that are widely available in outdoor and hardware stores contain chemicals such as mancozeb, copper oxychloride and tebuconazole, among others – all of which are effective at controlling the spread of myrtle rust. While the use of these chemicals is not practical in native forest and other natural settings, they may help save the plants in your backyard.

However, before you can take action against myrtle rust, you’ll first need to know how to identify the symptoms of the disease. Perhaps the most obvious sign is the presence of bright yellow or orange spots or powder, which tend to form on leaves, branches and twigs. This visual sign can vary between plant species, so be sure to get a professional opinion if you’re in any doubt.

If you do happen to find myrtle rust, be sure to get in touch with the Pest and Disease Information Service on 1800 084 881. You can provide further evidence by emailing a photograph of the host plant to info@agric.wa.gov.au.

It’s important to keep in mind that under no circumstances should you send a physical sample through the postal service or transport infected plant material anywhere. By doing so you could accidentally contribute to the spread of the disease.

What You Can Do to Reduce the Risks 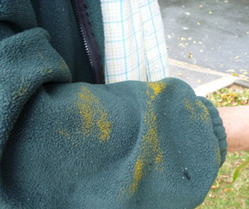 While the government and various environmental agencies are working to control myrtle rust, there are a number of things you can also do as an individual to help, particularly if you frequently travel to Queensland, New South Wales or Victoria.

When travelling interstate, you should always try to change your clothes and footwear before you come back into Western Australia, as they may be hiding spores. When you get home, be sure to thoroughly wash all items of clothing that you wore while visiting one of the aforementioned states.

Vehicles are also a common means of transportation for myrtle rust spores and are capable of carrying them great distances. As such, always check that your vehicle is clear of any plant material before re-entering Western Australia. You can give your car a more comprehensive cleansing by giving the tyres a good scrub, cleaning your floor mats and ensuring no plant material is clinging to the outside or underside of your vehicle. Carry out this check when leaving Queensland, New South Wales or Victoria and again when entering Western Australia to prevent carrying the spores westward.

Keep in mind that it’s illegal to bring any plant material or even traces of soil into Western Australia via rail or air, so be sure to check your body and possessions carefully before departure and arrival. 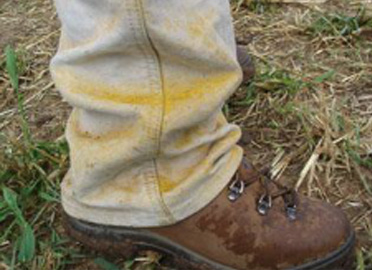 If you’re concerned about the spread of myrtle rust and want to take steps to protect the plants in your garden from this deadly disease, you’re going to need the services of a professional tree surgeon. With years of experience in the industry and a strong focus on customer satisfaction, Perth Arbor Services is your number one choice when it comes to expert arborists in Western Australia. Contact the friendly Perth Arbor Services team today on (08) 9227 0010 for a free quote or more information on how we can help with all your arboricultural needs.